If you want to see one of the best waterfalls at the top of the South Island and also get some awesome views of Lake Rotoiti, this is the hike for you. It’ll take three to four hours to hike to Whiskey Falls and back and there is so much to see along the way. Keep reading for more information about this scenic hike in Nelson Lakes National Park, New Zealand.

From the car park on Mount Robert Road you’ll walk through the forest for 30 minutes or so before reaching the lake views. It’s not a boring track though – there are some nice little sections of rapids / small waterfalls to keep you entertained. You’ll have to cross a couple of streams, but you should be able to keep your feet dry (you might struggle later on though). 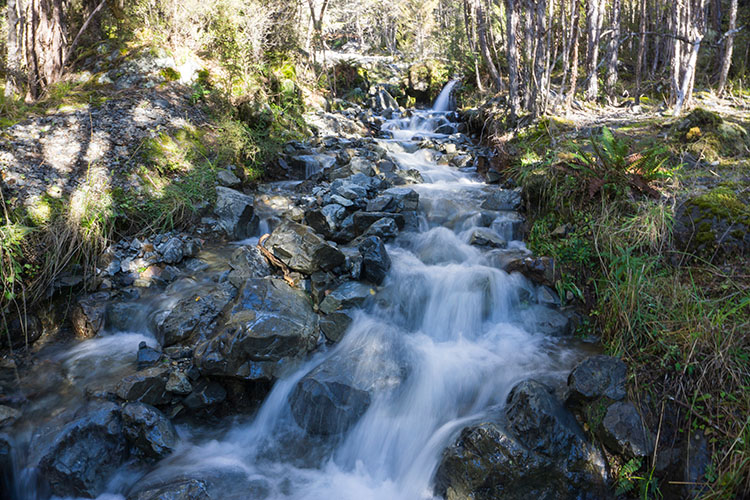 You’ll soon reach lake level and there are some great views to be had. We did this hike in winter and it had recently snowed – very pretty! The track is wet and muddy in parts and you might have to take a small detour as part of the track is washed out. It’s easy enough but you might get muddy like I did – wear good hiking shoes (or old shoes you don’t mind getting dirty). This track (known as the Lakeside Track) is easy to walk along and it’s mostly flat – this definitely won’t be the most challenging hike you’ll do in New Zealand! 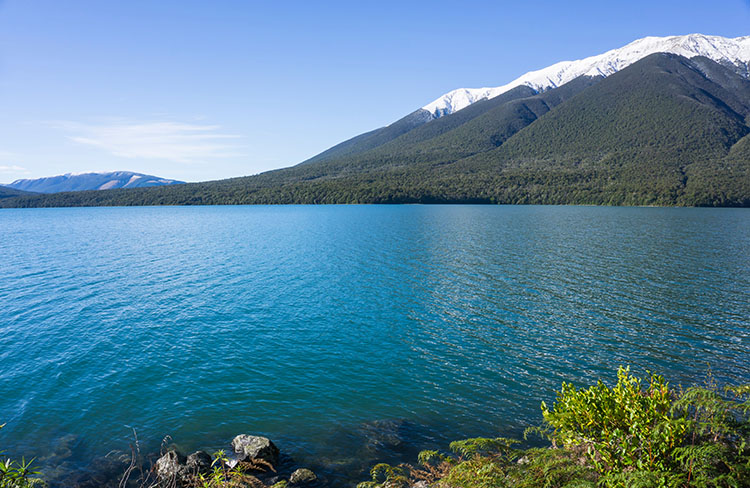 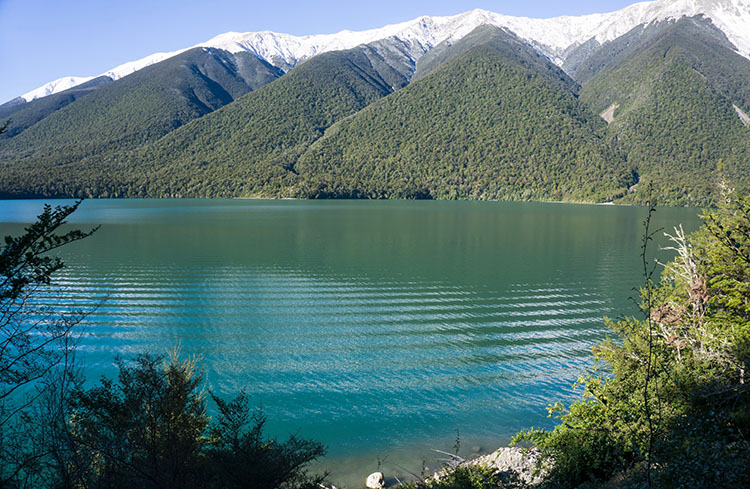 We were followed for much of he way by a cute little fantail — they are hard to get good photos of but we eventually (sort of) got there. There are a few more small waterfalls to see as you draw nearer to Whiskey Falls. You’ll also have to cross a river just before the falls (it might not usually be as high as it had rained a lot before we did this walk). My shoes got completely wet in the ankle high water, but it wasn’t a big deal – you could also do some rock hopping to keep your feet dry but you’re more likely to slip and fall doing that.

Just before Whiskey Falls you’ll see a mall pier – definitely go and have a look. We were there on a calm, clear day and the reflections of the surrounding mountains made for a magical scene. It’s easily one of the most picturesque piers I’ve seen in New Zealand. If you don’t feel like hiking you can catch a water taxi to this pier (the falls are only 5 minutes away), but more on that later. 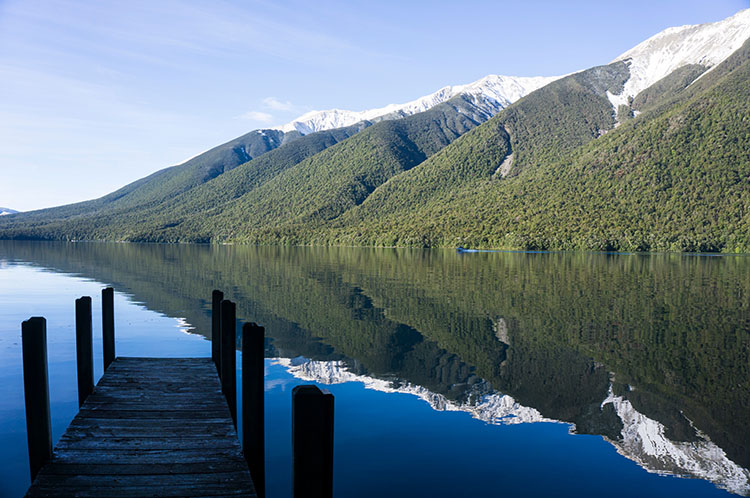 A small uphill track takes you to Whiskey Falls. This 40-metre-high waterfall towers above smaller falls and rapids below. It’s hard to capture it all in one shot, so I ended up climbing down and walking across some of the rocks for a better view. My feet shoes were already soaked so I didn’t mind getting wet and it felt safe enough (I’m definitely a safety-first hiker – you won’t find me risking my life for a photo), but you obviously do this kind of thing at your own risk. 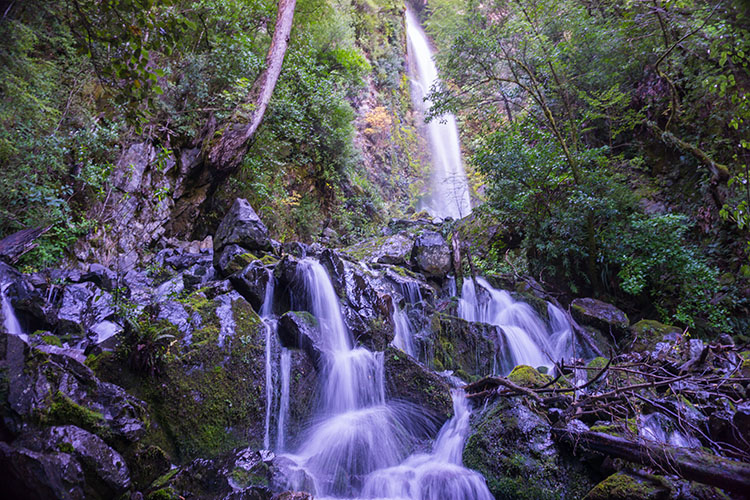 We kept walking for another five minutes or so (the Lakeside Track continues to Coldwater Hut) and got another great view of Lake Rotoiti with the surrounding mountains reflecting in the water. From there it was all the way back along the same track to the car park. 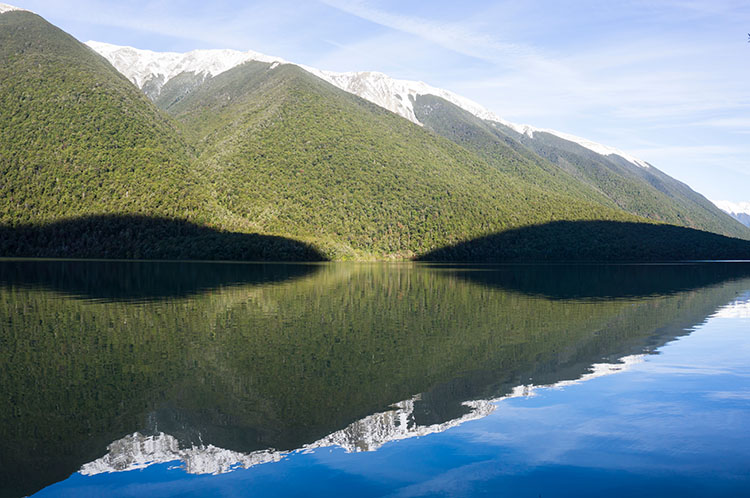 Other Hikes in the Area

You could do the whole Lake Rotoiti Circuit (8-10 hours) but I can’t imagine the views being any better than what we saw on the hike to Whiskey Falls. There is also the 4-7-day Travers Sabine Circuit and several other hikes above Lake Rotoiti, including the St Arnaud Range Track and the Mount Robert Circuit. Those are alpine routes and should only be done in good weather – check the Metservice website for up to date weather conditions. Someone died in this area recently – it can be dangerous in the wrong conditions.

Getting to the Track

The track to Whiskey Falls starts at Mount Robert Road in St Arnaud, the biggest (or pretty much only) town in the area. It’s around 90 minutes from Nelson. There’s a small car park and from there it’s very easy to find your way to Whiskey Falls. There’s a pier closer to town (near the information centre) which is a popular spot for photos and there’s also another one on Mount Robert Road (a couple of kilometres before the car park you’ll need to stop at).

Are you thinking of hiking to Whiskey Falls? Did this post convince you to do it? Let me know in the comments below!